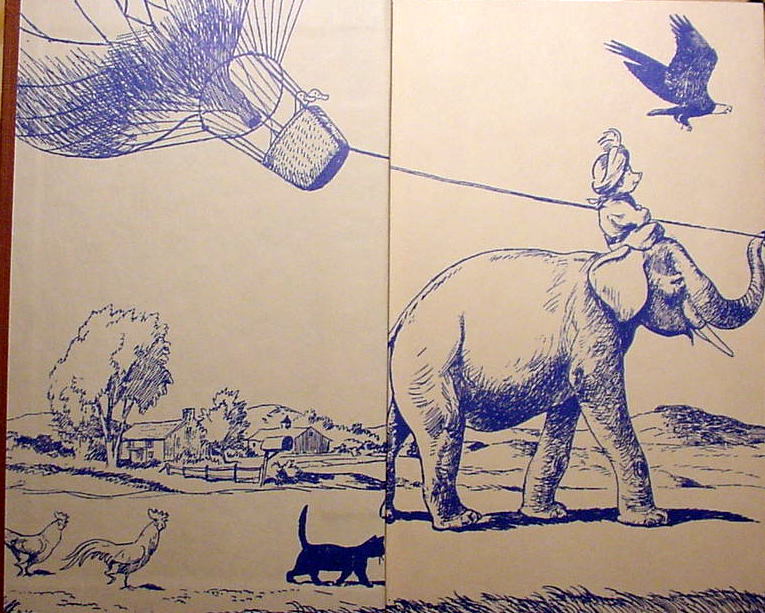 The meeting in Canada was a big success!  In typical Freddy fashion, we accomplished a great deal in a day and a half. We heard the following presentations:

(See the links below this page to view videos of Friends of Freddy reading from their favorite Freddy books!)

STATE OF THE BARNYARD ADDRESS

(This version has been edited for the web.)

Ladies and gentlemen, animals, birds and insects (if any)… Good morning!

If we haven’t already met (or even if we have), I’m Randy Cepuch, current president of the Friends of Freddy. Thanks to all of you for being here.

I’d like to start by observing that Canada is mentioned ten times in the Freddy books. It’s in North Pole (aka More To and Again), published in 1930, three times.

But after that, 26 years passed before Walter Brooks once again invoked the big country not at all far to his north – once in Simon the Dictator, in 1956.

Then it turned up three times in Flying Saucer Plans, in 1957, and three more times in Freddy and the Dragon, in 1958.

In fact, Canada is mentioned on the very last page of that very last book, so in a sense we’re picking up where Brooks left off.

Some of the Canada mentions are fleeting, but I’d like to read you two of the more substantial ones this morning. Let’s start with North Pole, where there’s this bit as the animals head north:

“… One night they crossed the Saint Lawrence River by a long bridge, and then they were in Canada. They had some trouble crossing the bridge because customs men lie in wait at each end and make travellers pay a tax on certain articles. These articles that can’t be brought into a country without paying are called dutiable.

Of course, the animals didn’t have any baggage with them, but the Canadian customs man thought some of the animals themselves were dutiable, so he held them up. ‘Let’s see,’ he said. ‘Milk and feathers and beef and hides – I dunno but there’s a duty on all of ‘em.’ And he took out a little book and licked his thumb and began looking through the pages to see if he could find out what the duty would be on Mrs. Wiggins and Charles and Henrietta.

Things looked bad for a minute, but Ferdinand whispered in the goat’s ear and then flew straight at the man and knocked the book out of his hand. The latter stooped to pick it up, and as he did so, Bill put his head down and charged at him. The goat’s hard head with the strong curving horns hit the seat of the customs man’s trousers with a smack and shot him into the ditch at the side of the road, and before he had even begun to pick himself up, the animals had galloped off into the night.”

I imagine some of my fellow US residents may have had a similar experience getting here.

Many years later, in Flying Saucer Plans, Freddy and Jinx are planning a riding adventure but can’t agree on a destination:

“Freddy had argued for Cape Cod, where he could get some sea bathing. But Jinx, who although he could swim well enough, didn’t enjoy the water much, voted for Canada. He wanted to visit Montreal and Quebec, where he could hear people speak French. ‘I want to see if they really understand each other when they make those queer sounds,’ he said. ‘Personally, I think it’s just double talk. I’ve heard it talked on the radio, but nobody can make me believe that that stuff means anything. You and I could get up, and I could say: ‘Ollicky pigglebob foozle?’ and you could nod your head and say ‘Mealy toofer condespation,’ and we could say we were talking Sanskrit and everybody’d believe us. That’s what I think French folks do when there are foreigners around. When they’re alone they probably talk as good English as we do.”

Okay, then. So much for feline political correctness.

Now, down to business.

Since our last convention in October 2016, we’ve accomplished several things:

• We’ve coordinated a series of individual donations used to buy more than 50 Freddy hardcovers for distribution in school classrooms and libraries in Southern California – a program kicked off by a member who simply wanted to share the joy she gets from Freddy books.

• At the request of our Overlook contacts, we’ve established a Twitter presence: RealFreddyThePig. Interestingly, there was already a Freddy the Pig page – apparently set up by someone tweeting very occasionally on behalf of a beloved guinea pig pet.

Our Twitter feed doesn’t do politics, doesn’t seek global attention at obscene hours and adheres to the code of behavior on our Yahoo group maillist: Be Nice. Our Tweets are pretty much pithy quotes from the books and pictures of Little Free Libraries with Freddy books in them.

• Our other digital media – the Yahoo group, our Facebook page and our own website – have often featured similar material plus other contributions from members. While we’re here, Alice and Jeb will be doing some video interviews we hope will find a place on our website and possibly other places as well – maybe YouTube.

• We’ve tried to make hay with apparent celebrity connections. Clint Eastwood told GQ a decade or so ago that he loved the Freddy books as a kid. I tried sending a letter to him, introducing us, a few months ago. I tried two addresses; one letter was returned as refused.

Clint was a guest star on the Mister Ed TV series, which of course was based on short stories by Walter Brooks. There’s a Mister Ed page on Facebook. I’ve posted about us on that page, hoping that readers are open to talking animals other than just Wilbur Post’s friend.

• Intermittent talk about raising a statue to our pig remains just talk. Peter Mayer at Overlook had suggested we might consider Washington DC as a site for one, given Brooks’ time there plus Freddy’s occasional visits and contacts in the US capital. Amazingly, I discovered there’s already a pig statue in Falls Church, VA – commemorating a pig farm owned by the ancestor of a car dealer now at the same location. The folks in Roxbury, where many of the Freddy books were written, would love to have a Freddy statue, perhaps outside the local library.

But contacts with sculptors have been discouraging: they don’t call back if you want to spend less than five figures.

There may be alternatives: one or more hoofprints, or a pig-shaped weathervane. It’s the sort of thing we can talk more about this afternoon.

• Last spring, I surveyed executive committee members about ways we might spend our acorns. It was clear that a few items had little to no support, so they haven’t been pursued – for instance, establishing a scholarship for study of children’s literature and contributing toward funding research into pig-human relationships.

• Meanwhile a survey of the membership at large revealed that the single most important thing we can do to increase attendance at our conventions is… to hold one in California, where roughly a quarter of our members live!

So we’re planning a meeting there in 2019, at the Arne Nixon Center for Children’s Literature, on Cal State’s campus in Fresno – where Walter Brooks’ personal papers reside, courtesy of a donation by our own Michael Cart. Michael’s looking forward to showing them to us. The dates aren’t yet set.

• Before that, of course, we’ll hold our usual even-numbered year convention in New York State. Attempting to be responsive to concerns about accessibility and comfort, I’ve looked at several alternative locations in the Catskills and in the Finger Lakes areas and am currently trying to negotiate acceptable rates.

• One thing I’d like to hope will not happen when we hold that meeting is a musical chairs exercise when the board selects officers for the next two years. I’d like very much to get some new blood involved.

The dozen or so people who helped on the Little Free Library distributions demonstrated interest and reliability, but many of them have never been to a convention and aren’t likely to attend one until we get out west in 2019.

There are a handful of folks who HAVE been to several NY state conventions over the years who might well be willing and able to be more involved, and we’re doing our best to make that happen.

This afternoon I’d like to spend some of our time discussing how we might increase member involvement and what sorts of roles we might want to fill to help ensure our own future. Perhaps we could benefit from a publicity coordinator, a membership recruiter, a digital media expert or a Poet Laureate?

We’ve been around for more than 30 years now. That’s long enough – and some of us are getting old enough – to think it’d be appropriate to have someone serve as our group’s Historian.

It took me far too long to realize the obvious choice was to enlist our Secretary, Connie Arnold, who already does the best job of memorializing our gatherings. I’m pleased to announce that she graciously accepted.

Thank you, and may God bless the First Animal Republic.