The Man Who Gave Freddy a Face

The legions of Freddy the Pig fans will know that in the very first Freddy book (To and Again), our friend Freddy wasn’t the hero; he was just one of the thirteen Bean Farm animals who took a vacation trip to Florida. Similarly in the second volume in the then nascent series (More To and Again in which the gang journeyed to the North Pole) Freddy was, at best, a co-star. Yet by volume three (Freddy the Detective), the plucky pig was front and center, the indisputable star. How did this evolution come to pass? Well, when Walter R. Brooks, Freddy’s creator, was asked why a pig instead of a dog or a cat should have become his “permanent hero,” he mused in reply, “Perhaps it is because Kurt Wiese draws such very sympathetic pigs.”

The simpatico Wiese (pronounced we-see) (unless you’re German, in which case you’d pronounce it vee-zuh) was, of course, the man who – with dash and verve — illustrated all twenty-six Freddy books; the man who gave Freddy a face (and a full figure!). With more than four hundred books to his credit, Wiese was one of the most prolific – and gifted — children’s book illustrators of the twentieth century. The critic Barbara Bader has written that Wiese had “an outstanding visual memory. He could work in a variety of mediums and styles, draw animals and people with equal sympathy, convey ideas and information effectively, and he became, almost immediately, the most versatile and productive artist in the field of children’s books.” How’s that for high praise?

Like many other celebrated illustrators who began working in the U.S. in the 1920s and ‘30s, Wiese (1887-1974) was an immigrant, having been born in Minden, Germany, where, as he put it, he grew up “under a remarkable collection of paintings of the Dusseldorf School.” Nevertheless he was not encouraged to study art; instead being sent to Hamburg to learn the ins and outs of the import-export trade. “After being able to count the threads of a ten shilling shirting just by feeling it with my hand,” he once recalled, “I was sent out to China.” Arriving in 1909 when he was just twenty-two, he spent the next five years traveling, trading, and becoming conversant in Chinese. With the outbreak of World War I, he was taken prisoner by the Japanese in 1914 and turned over to the British. The next five years were spent as a prisoner of war, one year in Hong Kong and four in Australia. It was there that he discovered his gift for illustration. “Deeply impressed by the landscape and the animal world of Australia, I began to take up drawing and writing.” Returning to Germany in 1919 with a bulging sketchbook, he worked for four years designing children’s books and sets for a film company. Then, longing, he said, “to live under a warm sun again,” he set sail for Brazil in 1923 and spent a year “traveling through jungles, surviving a revolution, and meeting Indians.” Following these adventures he settled down and spent the next three years illustrating textbooks and children’s books for a Brazilian publisher. He also did work for a newspaper, drawing cartoons and producing a weekly children’s page.

Then came 1927 and “Wanderlust again,” Wiese recalled. “This time, the call of the North. I landed,” he continued, “on a gray winter morning at a snow-covered pier in Hoboken, New Jersey, was taken to Ellis Island for a glass of milk and a sandwich and then came long weeks of traveling through the canyons of Manhattan with a collection of sample drawings under my arm.”
History suggests that not too many of those weeks were actually spent trudging through Manhattan canyons, since a job with Collier’s Weekly magazine soon materialized followed by his first two book commissions. By 1929 his career was in full flower as he demonstrated by illustrating the first American edition of Felix Salten’s immortal Bambi. Though he may be best remembered for his remarkably fluid and dynamic line drawings (as in the Freddy books), he was also a master of the technique he used in Bambi: the lithograph. His work in color lithography is especially notable as in the case of Phil Stong’s beautiful Newbery Honor book Honk the Moose (Wiese had nearly as fruitful a collaboration with Stong as with Brooks, the two men working together on fourteen books). 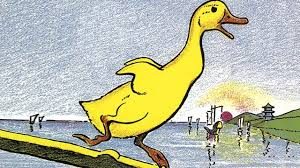 It was Wiese’s life in China that seems to have left the most indelible mark on both his visual memory and its manifestation in his work. “He put the stamp of his style on China for a generation,” Bader observes. Indeed, two of the nineteen books he both wrote and illustrated – You Can Write Chinese and Fish in the Air – were each Caldecott Honor Books. More fondly remembered, perhaps, are the illustrations hedid for Marjorie Flack’s classic The Story about Ping, the tale of a little Chinese duck who is the last to reach the houseboat in the evening and to receive a “Spank!” for his troubles. Ping is historically important for having been one of the first American picture books to have been written by one talent and illustrated by another. Previously picture books had been both written and illustrated by the same person.

If China lived in Wiese’s memory, the man himself lived, more prosaically, in New Jersey. Recalling his early days in America he once said, “I married and bought a little farmhouse at the edge of the woods which cover the rocky banks of the Delaware River about twenty-five miles above Trenton, New Jersey. It’s a good life. I can sit at my window and the animals come to me. They make me understand how they live.”

Is it too much to hope that one of those animals was a talking pig named Freddy?