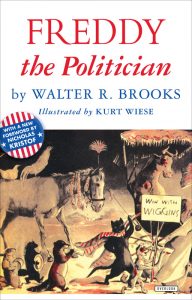 New British Editions: On April 21, 2016 Freddy the Detective and Freddy and the Dragon were published in England by Duckworth. To order go to amazon.co.uk.

Freddy is also available in Ebooks. Thanks to Open Road Media (in cooperation with Overlook Press) all the Freddy books are now available in electronic editions from Amazon (Kindle), Nook, iTunes, and other sources for less than $8 each.

Overlook Press has republished all of the Freddy books and they are available through Amazon, Barnes and Noble,  and your local independent bookseller.