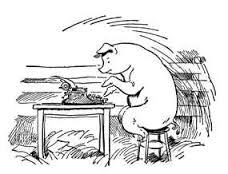 There are more than 250 characters, animal and human, in the Freddy books. List some of your favorites and discuss why you like them. Then, based on what you learn about them from your discussion and your reading of the books, write a brief biography or autobiography of each, imagining details as necessary.

2. There are a number of memorable villains in the Freddy books. List as many as you can and discuss what motivates them. How are they similar? How are they different? How many of them are animals? How many are humans? How does Freddy react to and with them?

3. Friendship is a recurring theme in the Freddy books. Who are Freddy’s best friends? What does friendship mean to Freddy, and what are some of the ways he helps his animal and human friends? 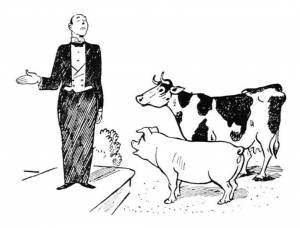 1. Walter R. Brooks uses a number of devices to bring humor to his books. One of these is character exaggeration. For example, Charles the rooster loves to talk and give speeches. Can you think of other characters that are exaggerated for humorous effect? (Another example: Mr. Groper, the hotel manager, has a weakness for big words, or as he puts it, “I’m habituated to this here sesquipedalianism.”)

Brooks often uses a device of humor called “incongruity” in which characters or events are paired in surprising and unlikely ways. For example, Freddy (a pig) rides a bicycle; Leo (a lion) enjoys going to the beauty parlor to get a permanent wave for his mane. Can you find other examples of incongruity? What makes them funny?

4. Brooks enjoys word play and his books are filled with funny names. Make a list of them and discuss why they’re funny. He also enjoys making up humorous expressions: Leo, for example, says things like, “Well, dye my hair,” and “Well, paint my toenails shell pink.” Make a list of some of these, discuss why they are funny, and then create some of your own for individual characters.

Freddy is an accomplished poet. Pretend you’re Freddy and write a poem about how it feels to be a pig.

Some of Freddy’s poems are parodies of famous poems and songs. Some examples are “The Old Hotel at Lakeside,” a parody of Rudyard Kipling’s “Road to Mandalay” (in Freddy Goes Camping) and “The Midnight Ride of Hank the Horse,” a parody of Henry Wadsworth Longfellow’s “The Midnight Ride of Paul Revere” (in Freddy and the Bean Home News). Read both the originals and the parodies and discuss how Freddy has changed the original language and subject to suit his own poetic purposes.

Freddy writes a play in Freddy’s Cousin Weedly. Stage a classroom production of this play or write an original play about the Freddy characters (or you might adapt scenes from one of your favorite books.)

Make puppets of the Freddy characters and stage a puppet theater production.

2. Freddy the Politician is often compared with George Orwell’s Animal Farm. How do you think the two books are similar? How are they different? Which book do you like better and why?

3. Brooks enjoys poking fun at authority figures like politicians, military officers, wealthy people and even school principals (Mr. Gridley in Freddy Plays Football). What techniques does he use to make readers laugh at these characters? Is he fair?

4. Many of the Freddy books involve travel. Draw a map of some of the animals’ journeys, or, based on what you have learned about the Bean Farm and the nearby village of Centerboro, draw a map of “Freddy country.” 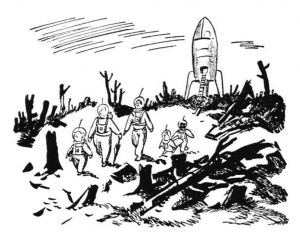 The Freddy books take place on a farm. What does the reader learn from them about farm life? Is this life treated realistically?

Many of the most memorable characters in the Freddy books are animals. How true to their animal selves are they and how are they like humans? Does Brooks make them too human to be believable as animals?

3. The animals in the Freddy books talk to humans. Why can’t animals in the real world talk? If the animals you know could talk, however, what do you think they would say? Write an imagined conversation with one of them.

4. How does Brooks feel about modern technology and inventions (think about Mr. Bean’s attitude toward cars for example). Make a list of Uncle Ben’s inventions (see especially The Clockwork Twin, Freddy the Pilot and Freddy and the Space Ship). How many of them are practical? How many even function? Make a working drawing of one of his inventions or build a model.

5. Uncle Ben builds a space ship in Freddy and the Space Ship and draws plans for a flying saucer in Freddy and the Flying Saucer Plans. How much do you think Brooks, writing in the 1950’s, knew about interplanetary travel? What mistakes does he make?

6. If you were writing Freddy and the Men from Mars, what kind of Martians would you create? Would they resemble Brooks’s? Write an article about the planet Mars and our attempts to explain it. 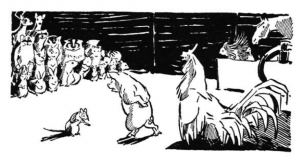 Freddy is a newspaper editor. Imagine that he has hired you as a reporter for The Bean Home News, and has asked you to write a news report of one of the incidents in the Freddy books (for example: the return of the animals from their Florida vacation; the trial of Jinx the cat in Freddy the Detective; the election fraud in Freddy the Politician.)

Write an editorial for The Bean Home News (some possible subjects: the use of “ringers” by the Tushville football team (see Freddy Plays Football); why Centerboro residents should re-elect Sheriff Higgins (see Freddy and the Bean Home News); why people shouldn’t eat meat (especially bacon and ham).