The Freddy the Pig Books 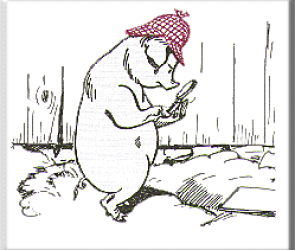 First published by Alfred A. Knopf between 1927 and 1958, the 26 Freddy the Pig books, written by Walter R. Brooks and illustrated by Kurt Wiese, are humorous stories of the many adventures of the Bean Farm animals. Freddy, the leader of the band, is a pig of wide-ranging talents and interests. He is a poet, a detective, a pilot, a cowboy, a banker, a newspaper editor, and first and foremost, a friend. Freddy and twelve other animals travel to Florida in the first book, shaking the hand of the President when they pass through Washington, D.C.

Over the years, the animals learn to read, develop friendships with a wide range of human characters even more eccentric than the animals, engage in space travel, sports, and ballooning, stop an animal revolution, and provide countless moments of fun and laughter for the reader.

The Friends of Freddy are just crazy about a pig, Freddy by name, the fictional talking animal hero of a series of 26 children’s books bearing his name and written by the late Walter R. Brooks from 1927 to 1958.

Freddy, that pig of many parts, has always had his friends, of course, but it wasn’t until 1984 that they became an official organization with a capital “F”; i.e., The Friends of Freddy. Here’s how it happened, according to Toronto playwright Dave Carley, founder of the Friends: In 1983 he wrote to Dorothy Brooks, Walter’s widow, telling her how much he loved the books and asking if she had heard from other fans. In reply she sent him a clutch of letters; he contacted some of the senders; enthusiasts started a newsletter and, on October 3rd, 1986, a faithful few gathered in Roxbury, New York, for an inaugural Con and the organization was off and running.

From the beginning one of the Friends’ stated goals has been to spread Freddy and Walter R. Brooks’s names throughout the known universe and they’ve made a good start on that, placing Freddy books in an eye-popping total of more than 120 countries around the world, ranging from Afghanistan to Zimbabwe to – though not a country but a continent – Antarctica! Closer to home, the Friends have distributed 225 Freddy books to more than 100 Little Free Libraries in 15 states. Freddy is everywhere!

And so are his Friends. An international organization with some 300 members – both children and adults – located throughout the United States, Canada and the UK, they’re a clannish lot, holding a Con every year; in even numbered years the gatherings take place in the fall in central or upstate New York, including Walter’s home town of Rome; not to mention Roxbury, the Catskills village where he spent the last ten years of his life, and also his Grandfather Brooks’ home town of Hamilton. The odd numbered years are a more peripatetic lot, Cons having been convened from New Jersey to California to Canada and at various times of the year. But if you don’t travel, don’t despair; you can visit the Friends at their Facebook page or follow them on Twitter.

It’s not all fun and games for the Friends, though. This 501c3 organization of volunteers also has a more serious purpose, sponsoring a book donation program to needy schools and libraries, children’s hospitals and homeless shelters and introducing Freddy to a whole new generation of readers.

You can read more about this devoted band of fans in the Bean Home Newsletter, the Friends’ quarterly publication. A subscription is a benefit of membership.

So join us. It’s a terrible cliché that would have Freddy wincing but it’s true: you’ll be glad you did.